skip to main | skip to sidebar

OK, maybe it isn't new, but I'd never seen it before. It gives a nice view (albeit black & white) of the murals. Obviously, this was more jungle-themed than tiki, but in those days, who knew (and who really cared)!
Posted by f-stop at 2:34 PM 4 comments:

In case you didn't already know, Kansas City once had two Kona Kai restaurants; one just north of the Plaza at 45th and Main (now a Holiday Inn) and another near the KCI Airport. Both were classic Polynesian palaces full of carvings and custom decor, and both closed in the '80s. Here is the only known photo of the airport location's interior. 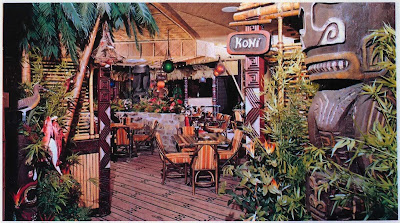 The "signature" decor piece at both locations was an 8-foot tall tiki carved by Oceanic Arts in Whittier, California (far right in the photo above). About seven years ago my friend Paul found the Plaza location's tiki outside of an oddities shop here in KC. It was in rough shape, but he stabilized it and it now stands in his fully decorated living room. This was the only 8-foot carving known to have survived. 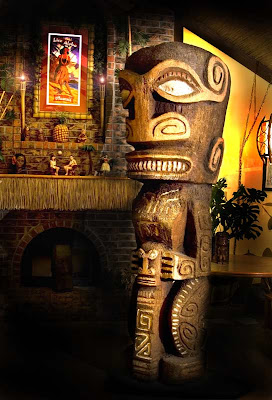 Until last Thursday. That's when one of my RSS feeds picked up this photo from an ad on Craigslist. 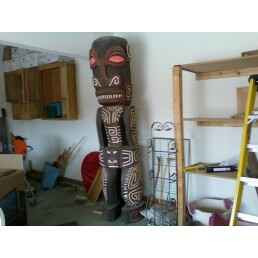 My first thought was, HOLY CRAP! IT DOES EXIST! My first action was to call Paul. Within the next couple of hours he had settled on a price with the seller and made arrangements to pick it up.

It's a sizable carving, but it's palm so it's not as heavy as you might think. Getting it into my truck was fairly easy. Getting it into Paul's living room would be interesting, but do-able. 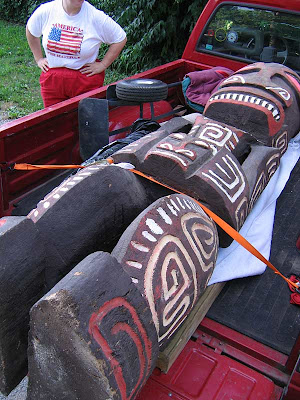 With the help of Paul's brother-in-law (a mover by trade) it was a pretty straightforward operation to get the new guy into place. It's really awesome to know they are both saved and appreciated now! I'll be going over to Paul's house soon to get some nice photos of them together. 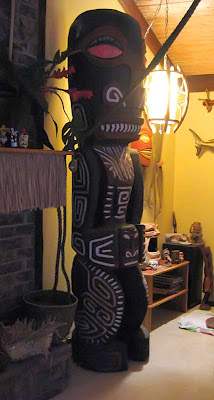 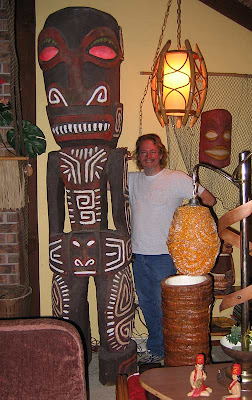 Adding things as we find them . .

City Directories indicate that "The Castaways" may have opened in late 1959, and was certainly open for business in 1960. Owner/operator Frank Dunn and his wife Eve launched the very successful venue. Quoting a Kansas City STAR, STAR Magazine article from 12-17-99, ". . the motif of the Castaways was something like Disneyland's "Pirates of the Caribbean" ride, to the point where papier-mache palm trees decorated the interior, and beach sand was spread here and there."

"Every Saturday the club hosted a hootenanny that offered a stage for anyone who had the nerve to get out on it." This opportunity became a launching point for great performers like Gene Clark and the Surf Riders, later the Byrds. 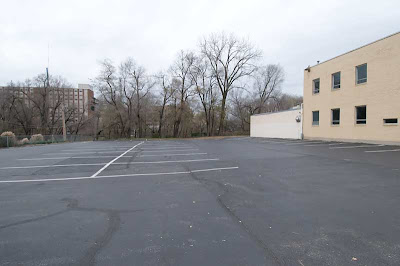 Today, there's sadly nothing but a parking lot where this place once stood. There has to be photos somewhere both interior and exterior, but we've found nothing thus far. The search continues . .
Posted by f-stop at 3:41 PM 3 comments:

The Tropics Lounge opened sometime during World War II and was located on the third floor (they counted the basement level as #1, so the third floor today is more like the second floor or mezzanine level). Here's a quote from the hotel's history flyer:

After dinner, the gentlemen would retire to the third floor to the popular lounge called the Tropics. The sound of thunder was piped in and the lights fluttered and went out. A mechanical hula girl would emerge from behind the bar and dance in a grass skirt while it rained behind the bar.

It was quite a place!

Here's the exterior of the hotel today, pretty much unchanged from when it opened in 1930. 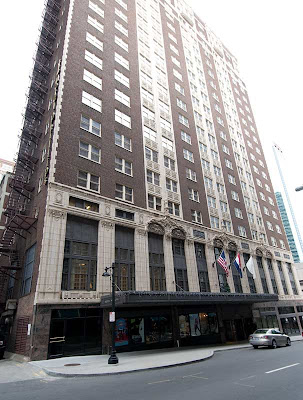 And the vintage menu, courtesy of Mimi Payne and Arkiva Tropica. 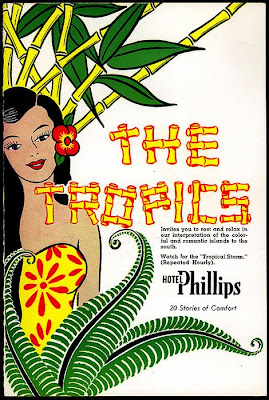 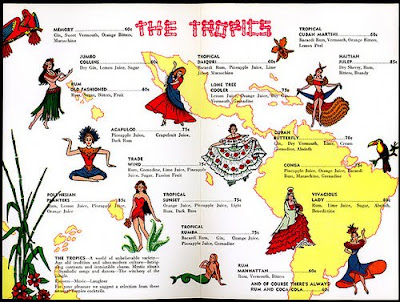 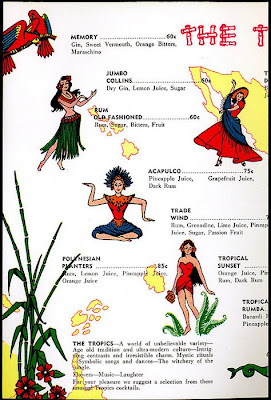 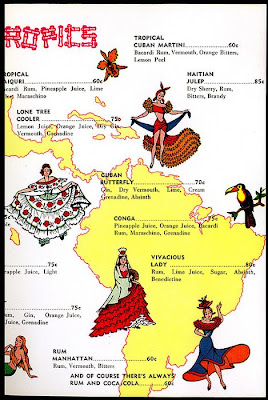 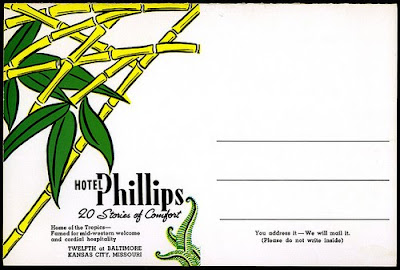 The hotel has undergone several remodelings over the years and the location of the Tropics Lounge is difficult to determine. Today it exists only in postcards and memories.
Posted by f-stop at 8:50 AM 15 comments:

Special thanks again go to Mimi Payne for the Bretton's Bali Hai menu below. 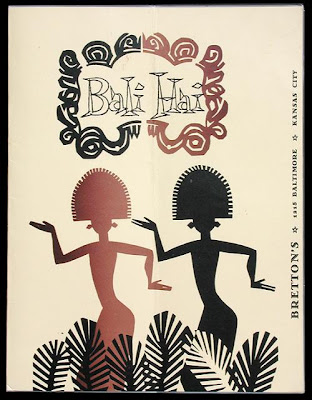 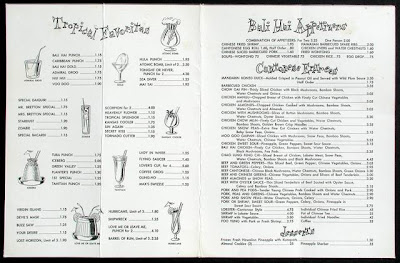 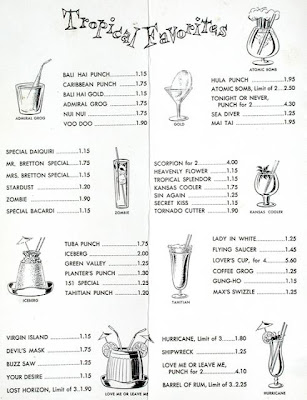 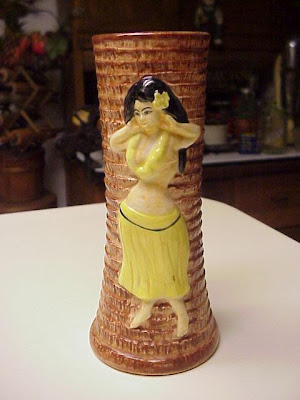 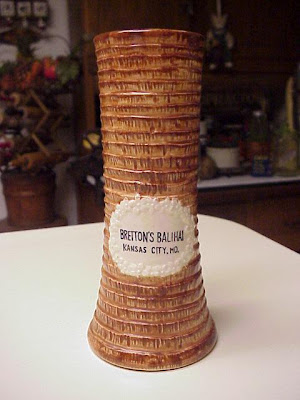 Max Bretton and his wife Mary’s place also featured a Main Dinning Room, the Cooper Lounge, the Baltimore Room and the Nasch Table. 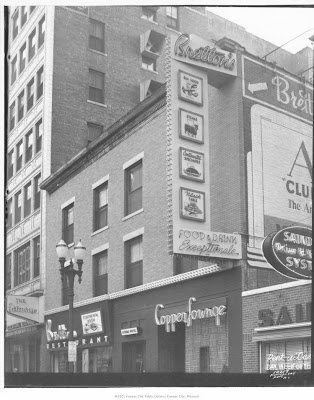 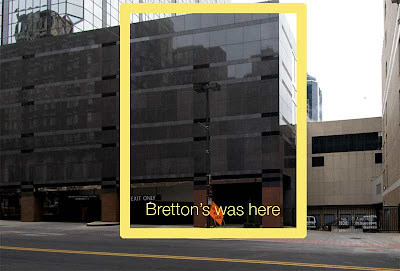 Search This Blog to organize posts by topic

The purpose of this blog is to collect information on all of Kansas City's Tiki locations. Everything . . photos, menus, drink vessels, etc. as well as memories . . will be included. Search this blog to organize the information in any way you wish. And feel free to add your comments about any location you have info on.